Bubu (grandfather) still remembers the days of his youth, when his arms where as strong as the tree trunks he was carrying—one tree on one sho ulder, the second on the other shoulder. And holding both together carefully, so he would not waste the pile of dirt packed on the top. They had no tools in those times; they don’t have much even now. But they had zeal and perseverance. Their hope was to finish an air-strip, so the planes could land. Though most of the time they could not see the planes, they could hear their motors. And they were working hard, keeping their eyes on the sky.

I had come from that direction. While telling his story, Bubu was constantly staring at my face and grabbing my arm, as if checking that I was truly there, in flesh and blood. As hard as it was for me, I had to stop him and tell him the truth: “No, Bubu, I am not one of your relatives’ spirit, returning from long ago.”, I gently said in Tok Pisin. He sighed and looked away, almost with shame. Then, he replied in Kewo-Meba: “The first whiteskin came, not long ago. He stayed for a little while and left. He was a tall man, but not strong. Now you are here, a small woman with a strong voice. Hauim! (haoo-wim), he declared firmly. My translator, the village teacher explained to me: “This is our word for the Bird-of-Paradise’s feathers. We decorate our head with them in time of joy and celebration.” They were all watching me. ”Urufumie!”, I thanked them enthusiastically, using my new vocabulary for my new name, and they all jumped to their feet and shouted with joy “Ahyahoo!”

May they greet this way our Lord, as their Lord, when Christ returns.

The entire village Gaimahou must have been gathered on the ai 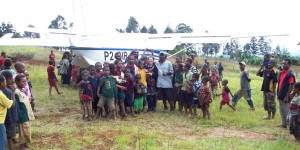 rstrip at the time of my arrival. My wasfemili (more than a ‘host family’, because they literally ‘adopt’ you), headed by Papa Clan, grabbed my belongings (called “cargo”) and pulled me away from the crowd, carefully surrounding me at all times, as if guarding a frail and valuable property of theirs. Needless to say, Papa kept his overly protective attitude toward me throughout my entire stay there. The bush house is nearby and we were followed my majority of villagers who were happy to stand and look. They watched and listened to the official address and welcome. Papa was brief and to the point – I am a member of the Kerawagi family, from the Kener clan, and they will always take care of me, even with the price of their own lives. Then all eyes and ears turned to me, it was my turn. I responded in the same manner, thanking for the honor, care and hospitality and quoted Christ – in an attempt to remind myself – when defining love as laying your life down for your friend. Soon the curious and onlookers left in groups, until our family unit was left by herself: Bubu, the grandfather, Papa Clan, Muna Miriam, his wife, their son and his 17-year old “wife” Roz, and I. Then evening came and we had been talking around the smoky fire about all that had happened in our lives since the time I had left them in June. That was the first day.

In the days that followed, I tried to put together some structure or focus for the coming weeks and it included hiking, testimony, Scripture reading, as well as daily devotions, prayer and alone time with the Lord. Just as last time, people came as soon as they knew I was there. It is my joy and privilege; it also consumes me and I needed to retreat often to rest and be replenished in a desolate place – usually by the edge of the mountain, where I could see Mount Wikauma, which all people in Papua New Guinea refer to as “The End of the World”. 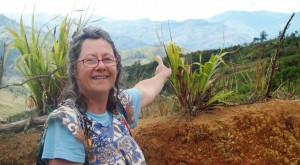 One of the main ‘hevi’ (burden, suffering) during the first three weeks was the war in a neighboring village. The community of Dulai, about 12 km away, was torn by fighting over a stolen pig and the two parties were determined to fight – with bow and arrow – until each side would lose one life. 36 houses were burned down. Women had grabbed the children and together with the elderly took refuge in the jungle, living there at the mercy of God. Heavy rain came, in this season of “dry”. We already had many sick, majority of which were young children. The villagers were concerned. Their hearts were softened and they sought God and His mercy every day, listening to God’s Word and sharing it with zeal and interest. We prayed constantly and sent peace makers who were able to communicate. Finally, Gaimahou gave pigs to be slaughtered and shared among the Dulai warriors, in order to establish peace. At that time Scripture was read and translated. Even among the fierce men, tears rolled down their cheeks when they heard how God breaks the bow and arrow (Psalm 46) and how He shelters and protects by day and by night (Psalm 121). The Kewo-Meba remember other times they had to give their “abus” (meat) and garden produce to their neighbors in order to force the peace upon them. It is not offering, but sacrifice; it is their food for which they work hard. They agreed that this peace is only temporary and listened carefully to the stories about the people of Israel and the teachings of Jesus Christ. Please remember the Dulai men, women, children and old in your prayers. May the Lord show them His mercy and may they repent and receive the peace which surpasses all understanding, not forced from the outside, but established and rooted inside, which only the Prince of Peace can bring and guard.

I look forward to all that the Lord is doing now and going to do, here and everywhere, as we are prepared for His return. Time is short. Are we ready?